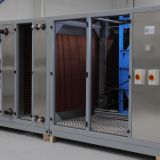 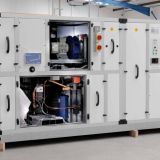 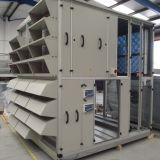 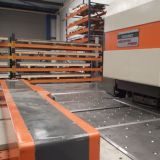 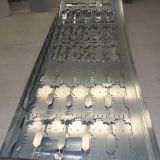 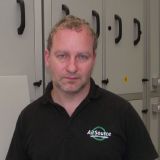 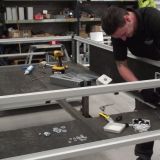 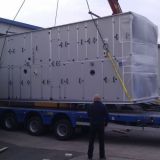 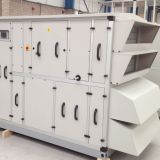 The entry level of the world’s most powerful sheetmetal CAD/CAM software, RADAN, has doubled production on an ageing Nisshinbo punch press, proving to be a smart investment for a company manufacturing a range of commercial and industrial heating and air conditioning systems.

During the first year of Air Source Ventilation being formed they used a commercial software brand inherited with their 25-year-old Nisshinbo MTP 1000F, but found all aspects of it to be too slow. “Every tool had to be placed manually on the part and it was manual nesting as well,” says Engineering Director Andy Pinchbeck. “The machine was probably designed for repeat sheets to be run off hundreds of times, so was very cumbersome for the constantly changing nests needed for our three or four-offs. Even with the software package we were using, it was a huge workload getting it ready to start punching.”

“This demonstrates how RADAN listens to what customers want their system to do, create that bespoke functionality for them, and then if it will be useful for everyone it becomes a standard feature.”

And their software issues didn’t end when punching started. “The punches were sequenced in such a way that around one in ten sheets had to be fixed or recovered, which took up to half an hour every time. The only way round it was to manually sequence each sheet, selecting which punch to do, and in what order. It was taking far too much time.”

As they approached their first anniversary, the company was growing and the number of parts they were manufacturing was increasing, so they needed to considerably reduce machine downtime. Rather than invest in a new machine, they opted to upgrade the software with RADAN’s entry-level system, Genesis. This gave them traditional RADAN CAM functionality and ease of implementation, swiftly resolving their production problems.

“Machine set-up, tooling lists, nest graphics, part identification and machine program are all automatically produced directly from the nest schedule,” says Andy Pinchbeck. “From the outset I thought we’d have to be buying newer machines by now, to be where we are today, but two years after installing RADAN we’ve still not had to upgrade to expensive machinery.”

All sheetmetal components such as double-skinned panels which provide the casework for the equipment, heavy duty steel base frames, internal blanking and structural parts, control panel back plates, enclosures and roofs, are now produced through RADAN Genesis. The number of sheets going through the Nisshinbo has doubled and machine down time through problems, is non-existent.

“The machine now runs for 13 hours a day, and it’s no longer a full-time job for someone to be sitting at the computer getting the job tooled and nested.”

The Nisshinbo’s limited memory means it cannot hold large programs, but Genesis overcomes this by creating a number of sub routines. “We use sheets up to three metres for some jobs, which can often contain 20 or 30 different complex parts, so the programs can be particularly large. And where there are just too many dissimilar parts even for sub routines to handle, it’s so easy with Genesis to split the job into a few different programs and send them to the machine in three or four sections.”

There were a couple of unexpected bonuses along the way, as well, which have improved productivity even further. Because all parts are labelled, the punch operator was manually typing out 15,000 labels over a six month period. “It was taking longer to produce the labels for a job than it was to punch the sheets.” Andy Pinchbeck mentioned that to RADAN’s area manager who organised a bespoke macro, automatically producing the labels directly from information on the nester. Their second macro was for sheet slitting, which has now been included in the main release.

“This demonstrates how RADAN listens to what customers want their system to do, create that bespoke functionality for them, and then if it will be useful for everyone it becomes a standard feature.”

He says that overall, RADAN Genesis is one of the key factors contributing to their success. “As a start-up company three years ago we needed to keep the initial outlay to an absolute minimum, and we couldn’t have got the punch output to where it is today without RADAN Genesis. So for us it’s been a smart investment by increasing our output without the need for additional expensive hardware, and it’s enabled us to concentrate on growing the business because we don’t have to spend our time just producing the parts.”

“From the outset I thought we’d have to be buying newer machines by now, to be where we are today, but two years after installing RADAN we’ve still not had to upgrade to expensive machinery.”